The age old debate about resting meat happens to be quite a controversial topic among top grillers.  Top chefs across the world swear by the importance of allowing your meat to rest or hold prior to serving.  Others claim it not to be near as an important step as it once was thought to be; with scientific experiments to back up the thought process behind diving right in and skipping the resting process.  Why is it such a hot debate? Taste, deliciousness, juiciness…… they are all subjective identifiers. This means everyone perceives and interprets them differently. So let’s have a look….. Should YOU rest your meat?

When it comes to resting meat, there are several theories about why this may be a good choice.  Be aware, that there are also varying strong opinions on whether these theories stand to be true!

Theory 1: Allowing the Moisture to Re-Distribute

So, what is the problem?  Well, scientifically, the theory doesn’t quite add up.  Moisture/liquid moves back and forth between compartments, it simply is not compressible. So, why when you cut into a steak immediately is there more liquid lost?  The more likely reason has more to do with temperature and less to do with actual liquid content. During the cooking process, the muscle fibers of the meat are proportionately related to the temperature to which it is cooked.  This is irreversible. A raw steak will always hold more liquid than a cooked one. However, as it rests, and the steak cools, the fibers of the meat widen and relax; allowing more of an equilibrium to occur. It’s a small change (approx. 2 Tablespoons worth); but can make a big difference in some people’s opinion.  Others feel that when you cut into your meat; mop up the juices with your fork or pour the juices back over top of the roast and no harm is done.

Meat will continue to cook once removed from the heat.  Depending on the cut and thickness of the meat, temperatures can rise 5-10 degrees.  A lot of recipes will account for this; therefore, if you skip the resting phase you are missing out.  On the other hand, if your recipe does not account for carry-over; you may end up with some over cooked meat.  One fact stands true; whether you are choosing to rest your meat or not, carry-over cooking definitely occurs so be sure to account for it!

What is “Juiciness” Anyway?

Surprisingly, you can spend hours reading about “juiciness”.  I have two major takeaways from research we’ve done and personal experience.   “Juiciness” is subjective; meaning everyone perceives it differently. There is no known test for juiciness; like there is for tenderness. Scientists can objectively measure meat tenderness by measuring how much pressure it takes to pierce the meat.  Secondly, there is so much more than “resting your meat” that can affect juiciness. Overall water content in the raw meat, whether the meat was previously frozen, whether the water is bound to proteins, fat content and/or marbling all may have significant effects on how juicy your steak or roast ends up being, once cooked.  The addition of salt can even play a large role with juiciness as well. Salt activates the salivary glands; increased saliva translates to increased juiciness (for some!).   I come from the healthcare field and cringed when Mike started to experiment more with salt (I admit; I was one of “those” who often just left the salt right out of recipes). Make no mistake; when used correctly, salt can make all the difference for taste and juiciness!

I am going to be honest here; it was years before I ever heard of the term holding.  I just lumped it all into resting; which is what the majority of the population does.

Resting meat is meant to be referred to the process of cooking meat to 165 degrees F or less (normal temperature) and letting it cool.  It is typically reserved for smaller cuts of meat (steak, pork chop, etc). It is based on the theories discussed above.

Holding meat is referred to the process used when cooking larger and tougher cuts of meat (brisket, ribs) to a higher temperature (200 degree F and over) and then keeping the meat warm for a period of time in a cambro or home-made cambro.  In these cases, rendered fat and gelatin add to the juiciness of the meat.  The holding process then provides slow, carry-over cooking which tenderizes the meat as it gently cools.

So as you can see; resting and holding are two different things used in different circumstances.  Controversy is high among chefs with whether to rest your meat or not; whereas, most agree that there is a definite place and importance for holding.

How to Rest Meat

There seem to be two major types of resting techniques.

How to Hold Meat

Time Guides for Resting and Holding

Top questions among grillers and BBQ’s: How long to let steak rest? How long to let chicken rest? How long to let meat rest? There are plenty of guidelines in this department.  Some chefs say to rest it for as long as you have cooked it.  Others, recommend to rest 5 minutes for every inch of thickness.  Overall, a general guideline is about 5-10 min. for smaller cuts of meat (steak, pork chops, chicken breasts)

Generally speaking most chefs and BBQ experts will say, for any meat that takes several hours to cook, you’ll want to be holding for at least 1-2 hours minimum.  Going longer is completely ok; but do watch the temperature. When holding, the internal temperature should stay above 160 degrees F. When Michael is done smoking a brisket he typically rests (actually holds) the brisket for 2-3 hours.

Our Preference : The Angry BBQ Perspective

So as you can see, with multiple, contradictory opinions it really can be hard to know what to do.  Taste, deliciousness, and juiciness are highly subjective. Try! Experiment! See what your taste buds prefer.  Ultimately, when cooking; you are cooking for yourself. So, figure out what tastes best to you and do that! Personally, we like our smaller cuts of meat to rest for about 7 min.  Mike holds his brisket in a home-made cambro for at least 2 hours….. even if it means we aren’t eating until 7:30. For us, it’s worth the wait! 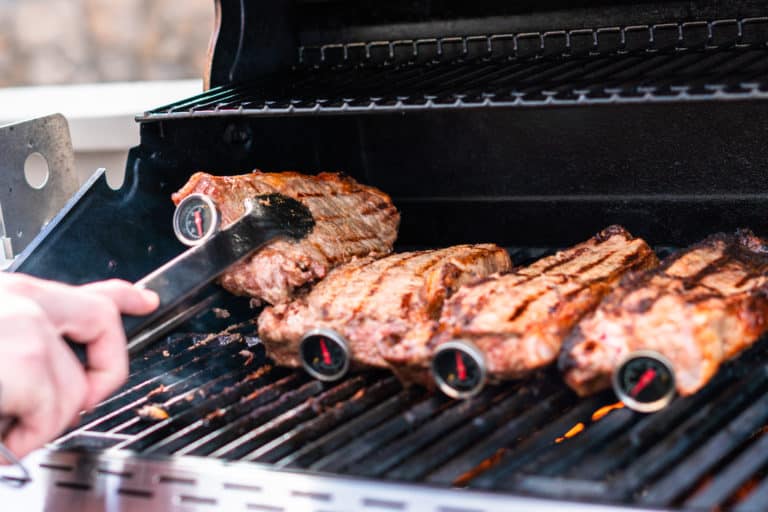 There’s nothing more embarrassing than dedicating your time to a wonderfully grilled piece of meat, only to cut into it and discover that it is 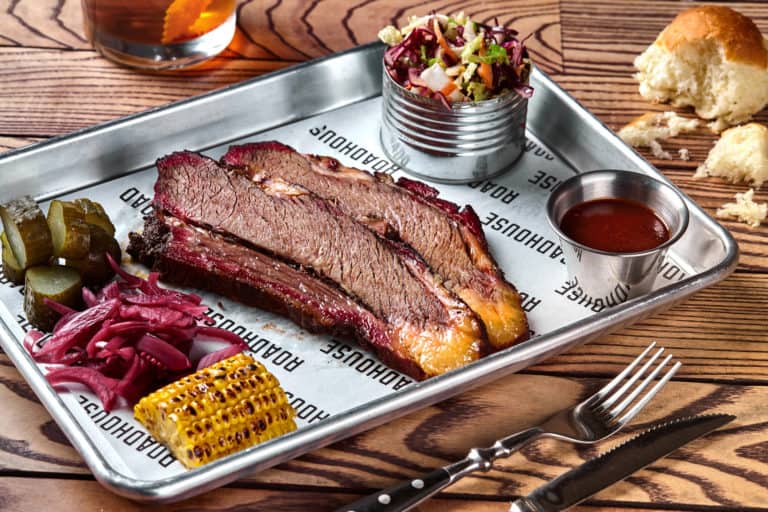 How Much Brisket Per Person Do I need?

If you have a BBQ party coming up, it’s vital to plan out every detail so that all your guests can go home satisfied after 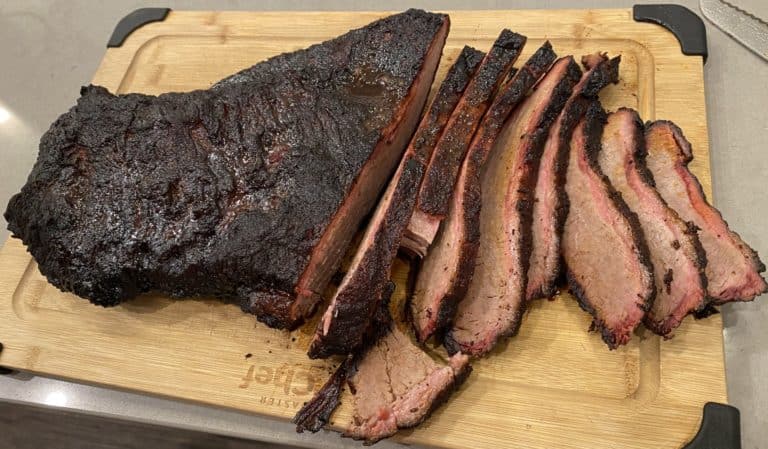 The Top 4 Ways to Reheat Brisket

With a bit of preparation and the right cooking utensils, even the toughest piece of meat becomes tender, rich, and delicious. Since brisket comes from 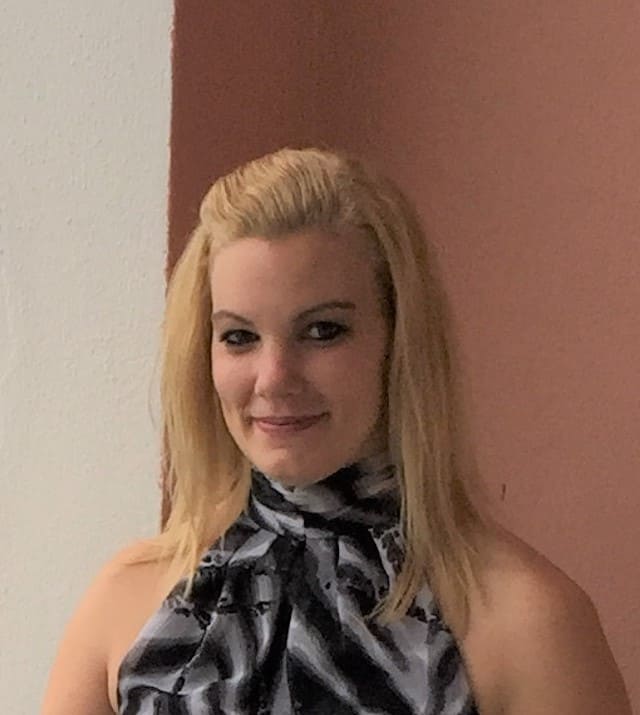 Jannah is the Co-Founder of AngryBBQ. She, like Michael, got the grilling/smoking bug when she was in her early 20's. A healthy lifestyle is important to Jannah as she brings a more health conscience approach to BBQ, offsetting Michael's continuous flow of brisket and ribs. Jannah is the level headed one that brings balance to AngryBBQ.

PrevPreviousBest Wood For Smoking Cheese
NextBest Gas Grills Under $200Next